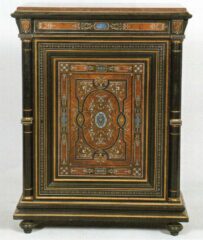 Very close to a « Meuble à hauteur d’appui » of similar design and ornamentation, however presenting single wooden posts on each side. Signed Susse Frères on the lock (Private collection, Paris).

Awarded medals several times at the famous Paris « Expositions des Produits de l’Industrie », Susse Frères (Brothers), Victor (1806-1860) and Amédée (1808- 1880), were known since 1841 as makers of « Art bronze pieces for clocks, candelabras, statuettes, etc ». Installed Place de la Bourse in Paris, they also presented at the second storage of their luxurious shop « fine furniture, ormolu mounted porcelain pieces and art objects ». As a worldwide renown foundry, the Susse company began to cast pieces as soon as the first half of the 19th Century The most well-known French sculptors gave their sculpted models to Susse in order to cast them, such Pradier who signed in 1841 the oldest known publishing contract for bronzes between a publisher and an artist. After the death of the two brothers, Albert Susse took over the business from 1880 until 1922.