The upper, part, surmounted by a frieze of posts and marble cabochons, consists of a central door decorated with a carved panel representing the birth of Venus, framed by two pairs of ringed and fluted columns with Corinthians capitals in gilded bronze revealing two doors with secret opening. Two drawers with lion’s head shaped handles and a central drawer decorated with tracery in gilded bronze complete the upper part of this cabinet.

In the lower part, two drawers on the belt with diamond moldings surmount two doors decorated with chiseled bronze medallions representing the profiles of King Charles VII of France and his mistress Agnès Sorel, framed by spandrels on a foliage background. Three detached carved uprights topped with gilded bronze foliage frame the panels.

The whole rests on five feet.

The attribution of the design to Edouard Lièvre is made in comparison with several Renaissance style items from the sale of his goods following his death Succession de Feu Edouard Lièvre, Paris, Hôtel Drouot, 21-24 Mars 1887 including : 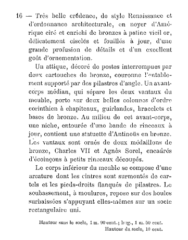 Edouard Lièvre (1829-1886) studied under the painter Thomas Couture (1815-1879), one of the more conspicuous artists in the circle of the Empress Eugenie. E. Lièvre soon devoted himself, however, to the art of furniture design. A talented ornamentalist, marked by the eclecticism typical of the Second Empire, Lièvre knew how to avail himself of skillful collaborators in order to create pieces in various styles: Renaissance, Louis 16th or Oriental, which last were part of the great artistic movement in fashion since the 1860’s: the Japanese style named also Aesthetic Movement. they recreated an imaginary Far East adapted to decorate Western reception rooms. As an Interior decorator Lièvre also matched his luxurious and refined furniture with bronzes, ceramics and even fabrics. This Oriental exoticism, which only the richest could afford, appealed to bankers, judges, artists and famous courtesans as well as the Royal and Princely families. After the death of Edouard Lièvre, the greater part of his models, sketches and cabinet designs were bought by art publishers such as « l’Escalier de Cristal » or by Ferdinand Barbedienne, thus giving them the right to reproduce Lièvre’s furniture with their own stamp (see « Ventes de la succession Lièvre »,  Hotel Drouot, 27 fevrier 1890).