Remarkable Cabinet with the ‘Four Seasons’

The upper part is formed by a scrolled broken pediment with a carved medallion supported by two putti at the centre. The facade features seven ionic columns adorned with ivy at their base and four female figures sculpted in the round, sheltered in niches and supported by cherub heads. The sculptures are allegories of the seasons. The upper part opens with three leaves and three drawers. In the lower part, the belt includes three drawers and is adorned with cartouches with mythological scenes. This piece of furniture is supported by two very richly sculpted winged sphinxes surrounding a central medallion adorned with a bacchanal scene, and stands on a moulded plinth and height feet.

This piece of furniture is a very fine example of the Neo-Renaissance style, which appeared in the years 1830 with Claude-Aimé Chenavard (ornemanist, 1798-1838), and was notably developed by the decorator Michel Liénard (1810-1870). This style followed the Neo-Gothic style and the cult of the Middle-Ages and succeeded on the long run. Inspiration sources were numerous in France and the iconographic richness of the mannerism flattered the taste of the Second Empire. Cabinet-markers notably took inspiration from the Henri II period and favored the use of richly sculpted solid and dark wood.

Our piece of furniture witnesses the interpretation and blending effort made by the artists of the nineteenth-century. It brings together the classicism of the Renaissance and its mythological subjects and the rigorous architectured structure, with a certain exuberance inherited from the Romanticism. 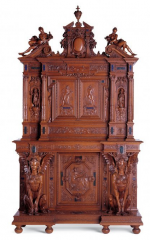 The firm of Fourdinois, considered during the Second Empire as the greatest furniture manufacturer in Paris, was founded in 1835 by Alexandre-Georges Fourdinois (1799-1871). It was developed in the context of the Expositions Universelles. At the time, the firm already produces furniture of the Neo-Renaissance style, such as a dresser that won the Great Medal at the London Universal Exhibition of 1851. The son, Henri-Auguste Fourdinois (1830-1907), joined the firm in 1860 and will become head of the firm in 1867. The high quality of his designs was remarked at the Universal Exhibition in 1862, when the jury awarded him two medals « for Excellence of Composition and Execution ». Henri-Auguste, now sole in charge, brought the firm to the summit of its achievements at the 1867 Universal Exhibition in Paris by winning the Grand Prize for his stand. Apart from the commissions he executed for the « Mobilier de la Couronne », he also produced high quality furniture for the Parisian bourgeoisie. The firm is at its zenith during the years 1862-1880. At this time, it is considered as an example to follow for other cabinet-makers, whether they are French, British or American.