Pair of Louis XVI style commodes in amaranth veneer and gilded bronze ; opening with three drawers, including one on the belt forming a writing desk and concealing two small side drawers.

The commodes are decorated with an interlacing marquetry in rosewood veneer set with a double ebony and boxwood net  on a green tinted sycamore background decorated in its center with boxwood florets. Rich ornamentation of chiseled and gilded bronzes decorated with acanthus friezes on the belt and garlands of flowers and frieze of posts at the corners, molded frames of water leaves on the side panels.

They rest on four fluted feet surmounted by Corinthian capitals, and with a Griotte marble top. 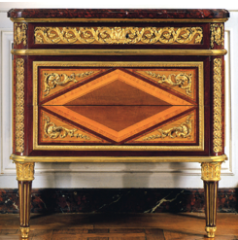 These commodes are inspired by those created by Jean-François Leleu delivered by order n° 32 of May 1st, 1773, with a third commode kept in London (Wallace Collection) for the bedroom of the Princesse de Condé at the Palais Bourbon in Paris. The central diamond, originally inlaid with a lily flower pattern, was changed during the Revolution.

Jean-François Leleu (1729-1807), Parisian cabinet-maker, began his career as an apprentice in Jean-François Oeben’s workshop. Installed on the chaussée de la Contrescarpe, he became Maître ébéniste in 1764 and moved to rue Royale-Saint-Antoine. He worked for an aristocratic private clientele, including the prince de Condé for whom he delivered furniture between 1772 and 1777, or the comtesse du Barry. He passed on his workshop in 1792 to his son-in-law Antoine Stadler.
His neoclassical style consists of monumental forms with flat surfaces, highlighted by fluted pilasters on the corners, friezes of chiselled and gilded bronze, and robust feet. In parallel with this production, he creates more elegant furniture. Leleu also santds out by the quality of his inlays, whether for his « paintings » or his geometric patterns.

Antoine Krieger (1804-1869) launched the cabinetmaking branch of Maison Krieger in the middle of the 19th century, before setting an important inner decoration department which provided much success and prestige to the company until 1945. The Krieger firm made allthe  sketches and designs in ancient as well as contemporary styles. A thousand workers were employed at n°74-76 rue du Faubourg-Saint-Antoine in Paris, producing luxurious and standard furniture. The high quality making gave birth to oakwood or mahogany cabinets decorated with finely chosen veneers. The Krieger firm won a second-class medal at the 1851 Universal Exhibition of London and took part in many international exhibitions, such as Paris in 1855.