Elegant pair of Louis XVI style three-lights sconces in chiseled and gilded bronze.
Composed of foliages, the branches mounted in arabesques are linked to the fluted barrel by a garland and a ribbon bow and ends by grapes. A little cupid holding a heart in the hands overcomes the central branch.
The whole is topped by a couple of lovebirds, giving their name to the model.

This model is inspired by the wall lights made by Feuchère for the Queen Marie-Antoinette in Saint-Cloud.At that time, two gilders named Feuchère, Pierre-François and Jean-Pierre, working for the Garde-Meuble are known, one of them being the maker of this pair.

In possession of the mold, Feuchère continued to repeat the model of the Queen, with some variations, at the end of the eighteenth century and the nineteenth century. 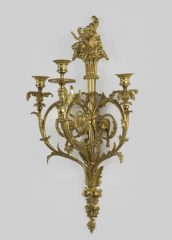 Pair of wall-lights made by Feuchère for Marie-Antoinette’s cabinet de toilette in Saint-Cloud, 1787, Musée du Louvre (OA 5256 1 and 2)

Guillaume Denière (1815-1903) was the pupil of the famous ornementalist Aimé Chenavard (1798-1838) and of the architect Henri Labrouste (1801-1875). In 1844, Denière succeeded his father in the family workshop, established in 1804, at 15, rue Vivienne in Paris. The business was at this time prosperous and four hundred workers worked to satisfy the numerous commissions from King Louis-Philippe and the upper classes. He made bronze furnishings, candelabras and centrepieces. He collaborated with a number of artists, amongst whom Carrier-Belleuse (1848-1913) and Constant Sévin (1821-1888). He turned out several clocks for the Tuileries Palace in 1852, as well as a ‘globe’ clock with rotating dials for the Grand Salon of the Château of Bagatelle. Denière’s work was very often remarked upon at the Universal Exhibitions, so much so in fact that the Emporer Napoleon III bought, at the Paris Exhibition of 1867, a clock set. His renown was by this point international. Amongst his most prestigious commissions, Denière produced 1854 a spectacular bronze centrepiece for the Russian ambassador, Kisselef, and decorative bronzes for the Viceroy of Egypt, Saïd Pacha, as well as railings for the Throne Room for the King of Cambodia, Norodom I, in 1862. At the 1889 Universal Exhibition G. Denière won a gold medal.