A large Japanese style four lights sconce, in shape of a dragon made in carved tinted alder, holding in its mouth a Japanese blossoming cherry tree branch, from which issues four bulb lights. 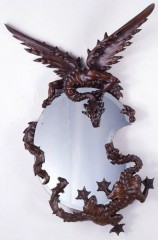 This wall-light is to be linked to a mirror by Gabriel Viardot, now exhibited at the Decorative Arts Museum in Paris (Inv. 2002.57.1), showing two dragons wrapped around a crescent shaped mirror.