A similar model was exhibited at the 1889 Paris Universal Exhibition

Rare round table made of patinated and gilded bronze with a top veneered with malachite and circled with bronze mounts adorned with ovum and beads. It stands on three patinated bronze feet with lion heads and paws, linked with gilded bronze X braces.

A tripod gueridon with feet like these ones can be seen on a picture showing the atrium of the Pompeiian house built for Prince Napoleon. Most of the Ancient style furniture was made by Charles Rossigneux (1818-1908) but this gueridon shows that the Barbedienne Company took also part to this work.

Otherwise a picture of the Emperor’s study at Saint-Cloud Castle demonstrates that a gueridon with such feet took place in it ; it illustrates the success of this model in the imperial family.

Guéridon with feet of the same design, in the Pompeian House of Prince Napoleon, Paris (view of the Atrium).

Some years later the Gazette des Beaux-Arts published an engraving depicting a gueridon exhibited at the 1889 Universal Exhibition. The engraving shows a gilt bronze plate resting on a tripod having identical feet and it reveals the longevity of this model inside the Barbedienne Company production. The caption mentions “Bronze plate designed by Mr Levillain and made by Mr Barbedienne (1889 Universal Exhibition)”. 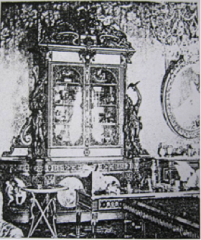 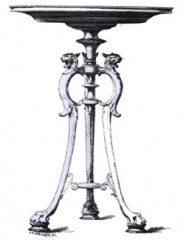 Ferdinand Barbedienne (1810-1892) created and headed at n°30 boulevard Poissonnière in Paris one of the most famous 19th century artistic bronze casting companies. He owed his reputation to his bronze casting of Ancient and modern sculptures, which subjects came from the greatest European museums, but also to his original bronze works designed in his workshop and reserved for furniture and decoration. In addition to his own production, Barbedienne worked for renowned sculptors such as Barrias, Bosio, Clésinger or Carrier-Belleuse. Awarded with two Council Medals at the 1851 London Universal Exhibition, the Barbedienne Company won at the 1855 Paris Universal Exhibition a medal of honour and eleven cooperator’s medals for the work of his co-workers, designers and chasers. The success of the Barbedienne Company at the diverse international exhibitions earned it several official commissions, as providing ornamental bronze for the Pompeiian house of Prince Napoleon, about 1860, avenue Montaigne in Paris. At the 1867 Universal Exhibition in his capacity as member of and speaker for the Jury, he was non-contestant, but exhibited nevertheless with great success cloisonné and champlevé enamelled pieces. Barbedienne was made an Officer of the Légion d’Honneur in 1867 and Commander in 1878 when he was compared with “a prince of industry and the king of bronze casting”. His glory did not decline with the passage of the time for at the Universal Exhibition of 1889 the critics thanked Barbedienne for the example he set for other bronze-casters by the perfection of his bronzes.