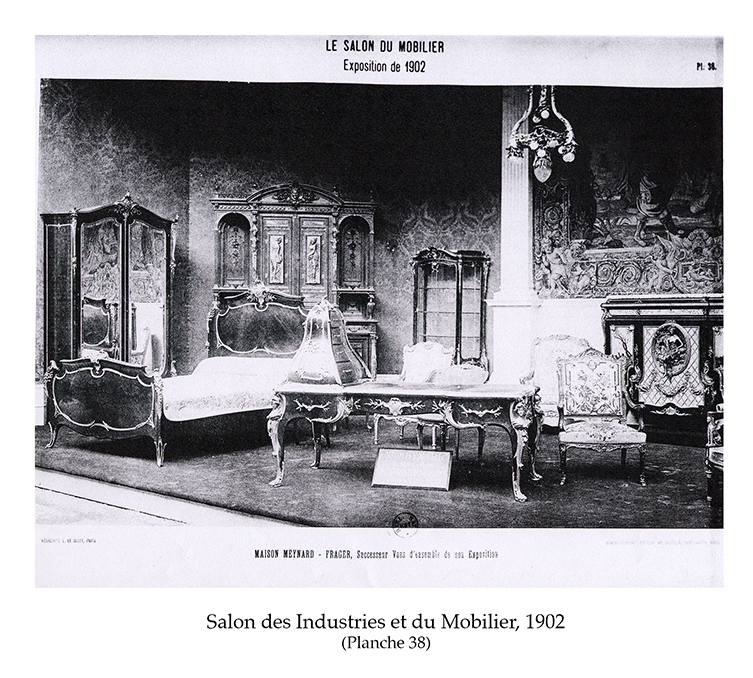 This rare Neo-Renaissance dining room furniture by the woodwork factory Meynard is representative of the taste for historical style in the second half of the 19th century.
Consisting of a monumental display sideboard, a dresser, a table and eight chairs, it is made of sculpted walnut, adorned with gilded bronze by Ferdinand Barbedienne, probably inspired by drawings of Constant Sévin.
This furniture is unified by repeated patterns, “brèche St Maximin” marble columns with gilded bronze capitals, ormolu medallions representing Renaissance inspired faces in profile, an ormolu faun mascaron and ribbed vases with ionic capitals.

Eight chairs complete this Neo-Renaissance dining room. The base rests on four legs, the anterior baluster and capital legs and the posterior square section legs, linked by a strut. The back of chairs is adorned with a rich sculpted décor and flanked by two capitals columns. The lower part is decorated with an openwork sculpted vegetal ornament. The wood pediment is ornamented with a central polished marble cabochon.

Important two part, Neo-Renaissance style, walnut sideboard; the lower part comprising four doors embellished with low reliefs in gilt bronze alternating with four detached columns of “brèche St Maximin” marble with Corinthian capitals. The upper part comprises two doors ornamented with gilt bronze low reliefs cast by Ferdinand Barbedienne, representing two nymphs after those sculpted by Jean Goujon in 1547 for the Fountain of the Innocents in Paris. On each side gilt bronze caryatids sheathed in Campan marble and recesses decorated with chains of fruit emphasize the structure of the piece. A pediment bearing the gilt bronze mask of a faun completes the ensemble.

The dresser is compartmented in a tripartite lower part, divided by marble and gilt bronze columns.
Two doors, adorned with gilt bronze Florentine Renaissance style medallions, flank the glass case in the centre.  Three sculpted frieze drawers support the top.
The upper part is divided in three panels: in niches on each side two gilt bronze statuettes surround the central gilt bronze pattern.

Statues represent two women draped in the antic style, one holding a palm, the other a cornucopia. Two sculpted chimeras finished the décor on each side. The semi-circular pediment surmounting the upper part presents a gilt bronze faun mascaron.

The renowned firm of Meynard was established at 50 Faubourg-Saint-Antoine in Paris in 1812. Created by Guillaume Meynard, the company became famous under the name of Father-and-Son Meynard when in 1833, Guillaume-Mathieu, the eldest child of Guillaume Meynard joined him. His father left his son alone managing the family-owned business from 1848. Guillaume-Mathieu was joined by his son Léon-Guillaume in 1866. The firm was then called Meynard and Son. Under the same name, Léon-Guillaume, then representing the third generation, took leadership from 1873 until 1889 when he sold his business to Eugène Frager. After winning numerous awards at the Products of Industry Exhibitions and later at the Universal Exhibitions (a gold medal won in Paris in 1878), the Frager furnishing and decoration company perpetuated the excellent reputation of the firm by being awarded a silver medal at the Paris Universal Exhibition of 1889.

The low reliefs and other bronze ornaments of this sideboard, of very high standard quality, were cast in the workshops of Ferdinand Barbedienne after designs by Constant Sévin. Those designs had been already used successfully on a bookcase exhibited by Sévin and Barbedienne at the Paris Universal Exhibition of 1867. Ferdinand Barbedienne (1810-1892) started one of the most famous 19th century artistic bronze casting companies. In addition to his personal production, he worked for famous artists such as Clésinger and Carrière-Belleuse. These artists production – as illustrated in their catalogue – varied from busts and ornamental sculptures such as clocks, candlesticks, sconces to decorations for furniture, as shown on our sideboard. Barbedienne’s production was always highly esteemed and he was, himself admired by contemporary art critics who compared him during the 1878 Universal Exhibition to a “prince of industry and the king of bronze-casting”.

Louis-Constant Sévin (1821-1888) designed silver-smith’s objects for famous firms like Denière and Froment-Meurice, before working for Barbedienne as sculptor-ornemanist since 1855. Sévin’s works are considerable, he designed furniture bronzes for the « hôtel de La Païva » and was particularly remarked at the London Exhibition in 1862, where he was awarded a medal. The most extraordinary object designed by Sévin for Barbedienne, was a Renaissance style gilded bronze monumental clock, for which Sévin won a gold medal at the Universal Exhibition in 1878.