Important philhellenic clock in burnished and amati gilded bronze, finely chiseled, representing on the terrace a couple elegantly dressed in « the turkish style », and richly decorated with foliage, scrolls and flowers. The feet, decorated with water leaves, rest on a rosewood oval base covered with a globe.

The theme of the clock comes from The Giaour, a fragment of a Turkish Tale, an English poem by Lord Byron published in may 1813 which tells the thwarted love of a Venetian, the Giaour –
term by which the Turks designate infidels and especially Christians – and of Leila, a slave belonging to Hassan’s seraglio, military leader of a Turkish province. The betrayal of Leila discovered, she will be thrown into the sea and her lover will avenge her by killing Hassan, then taking refuge in a monastery.

Symbol of prestige and modernity, the decorative clocks are a reflection of the taste of the era of a wealthy bourgeoisie and may be the subject of diplomatic gifts or between individuals.
Beyond the purely decorative aspect of such objects, watchmaking in the 19th century is part of a subtle mix of political, historical and literary references.

This philhellenic movement concerning the West finds a particular echo in France, one of the countries with the United Kingdom and Russia having suported the Greeks during their war of independance (1821-1830) to free oneself from the grip of the Ottoman Empire. Many clocks have been made, highlighting the courage of the fighters, celebrating the heroes of this war of independence and exalting national sentiment, inspired by contemporary literature evoking these events. 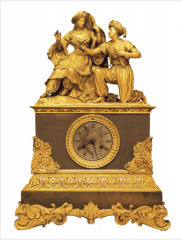