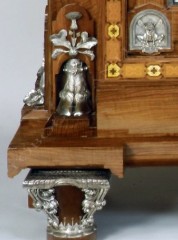 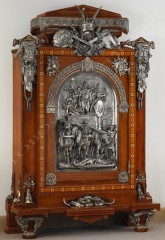 This exceptional neo-Greek inkwell was realized thanks to the collaboration of ornemanist J. Brandely, sculptor E. Frémiet and cabinet-maker C.-G. Diehl. The motif of the fantasy creature dear to Diehl, is to be seen on the famous cabinet made by him in 1867 and now exhibited at the Metropolitan Museum of Art in New York (Inv. 1989.197).

In collaboration with the designer Jean Brandely (active from 1867 until 1873), Diehl renovated his decorative repertory and created astonishing pieces of furniture in the Grecian style which had a dazzling success at the Universal Exhibition in Paris in 1867, where his cabinets also won a silver medal. Certain motifs were so typical of Diehl’s work that they received extensive commentary by the art critic J. Mesnard in his book « Les Merveilles de l’Exposition Universal de 1867 » (vol. II, pp. 133 & 149). He writes of a table of which « the pendant bearing hooks and the fan shaped radiating motif which ornaments the entablature are engraved with love » (p. 133) and a jewelry case where « The head in fine Grecian style makes up the essential part of the fine gilt bronze ornementation » (p. 149).

For this Universal Exhibition Diehl also formed a partnership with two famous sculptors : Emile Guillemin (1841-1907) who carved the relief for a mahogany sideboard with galvanic gilt bronzes (Orsay Museum, Paris, Inv. O.A.O. 992) and Emmanuel Frémiet (1824-1910) who executed the low relief for a cedar medal cabinet with marquetry and silver plated bronzes (Orsay Museum, Paris, Inv. O.A. 10440). Diehl was again rewarded with a medal of honour at the Union Central Exhibition of 1869 and a progress medal at the Universal Exhibition in Vienna in 1873 (Sideboard in blackened pear wood and lemon wood with galvanic bronzes, designed by J. Brandely with a low relief by E. Guillemin, Orsay Museum, Paris, Inv. O.A.O. 336). Showered with praise by the critics, Diehl is considered as one of the most innovating artists of the 19th Century. His final appearance was at the 1878 Universal Exhibition in Paris where he presented outside the competition, his most recent creations, including a work table in marquetry which with its naturalistic grasshopper motif anticipated « Art Nouveau » (Musée de l’Ecole de Nancy, Nancy).

A. Giroux
A rare jewel casket