Albert-Ernest Carrier-Belleuse (1824-1887), nick-named the « Clodion of the 19th century » ; was a very prolific sculptor, treating his decorative objects and his portraits with equal naturalistic rigor, full of charm and life. He entered the Paris Fine-Arts school in 1840, where he studied sculpture under David d’Angers. From the early 1860’s, he won success with his sculptures presented at the French Artists Salon and particularly during the 1867 Salon, where he was awarded a « médaille d’honneur » and the « Légion d’honneur » for his Messiah. The “new” Paris redesigned by the Baron Haussmann during Napoleon IIIrd’s reign, commissioned many of Carriere-Belleuse’s masterpieces : at the Louvre palace with the high-relief “L’Abondance” on the Flore Pavilion (1865), or the sumptuous decoration made for the most famous Parisian palace on the Champs-Elysées Avenue, owned by the Marchioness of Païva. But it is especially with the torcheres-statues of the large staircase of the Paris Opera house (1873), recently built by Charles Garnier, that Carrier-Belleuse meets a huge success with the Parisian public. In the catalogue of the 1878 Universal Exhibition an art critic praised Carrier-Belleuse and added: “Even the English come from London to ask him to work for them”. His busts, nudes, group compositions as well as his candelabras, vases and clocks, all chased remarkably, had a considerable success during the Second Empire. 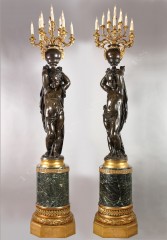