An elegant lady at her spinning wheel in a rich17th century interior with tapestry, carpet and antique furniture.  This historicist painting focus on the central figure with her cat, and her spilled balls basket. 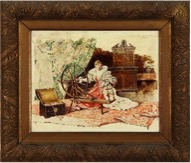 Edouard Toudouze was born in Paris in 1848 and died in 1907. He specialized in decoration painting, mythological and historical subjects, and illustration. Son of a father architect and engraver and a mother illustrator for fashion journals, he entered the Paris Fine Arts School in 1865, where he became the student of Isidore Pils, Monticelli and Auguste Leloir, his own uncle. He exhibited his first oils on canvas at the Parisian Salon in 1867, and then won the Prix de Rome in 1871. He was many times awarded by medals at the Salon des Artistes français (1871, 1877) and at the Universal Exhibition in 1889 (Silver Medal). As one of the most famous decoration painter of the time, he obtained many private and public orders : the Ball Room of the Vanderbilt Mansion in New York; the ceiling and decorations of the Foyer of the Opéra Comique (Paris); models for a set of ten Gobelins Tapestries destinated to the Britain Parliament in Rennes; a large fresco for the Sorbonne University in Paris…