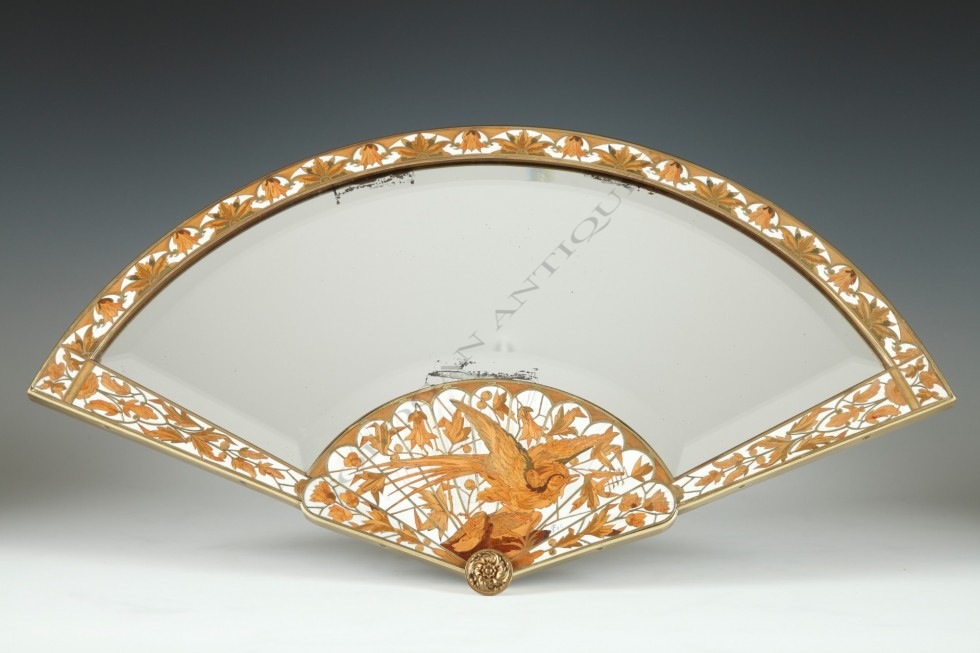 A bronze, ivory and tinted fruitwood marquetry table mirror, designed in the Japanese style, in the shape of a fan and decorated with a bird amidst blossoming branches. Reposing on gilt-bronze easel. 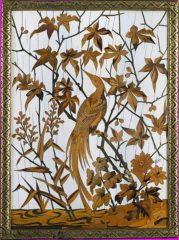 Alphonse Giroux and Company, famous curiosity and luxury goods shop was situated in Paris, at No. 7 rue du Coq-Saint-Honoré and in business from the time of the Consulate until the end of the Second Empire. The company was founded by Francois-Simon-Alphonse and continued in 1838 by his two sons, Alphonse-Gustave (1810-1886) and André (1801-1879). The father became a close associate of the royal family and specialized in the manufacture of refined items for gifts. Kings Louis XVIII and then Charles X were both supplied with gifts for « The Children of France » by Giroux. Making progressively small furniture, they were mentioned for the first time in 1837 in the class « cabinet-makers » in the Paris Almanach. It was Alphonse-Gustave, however, who really expanded the activities of the firm as is testified by the report of the jury at the 1839 Products of Industry Exhibition awarding him another silver medal. Alphonse was also quick to participate in the famous and soon figured among the best in the luxury goods business. After buying a writing desk at the 1855 Universal Exhibition Napoleon IIIrd bought several other pieces of furniture, candelabras and clocks from Giroux for the Compiègne Palace. In 1857 Alphonse Giroux transferred his shop to No. 43, boulevard des Capucines where he continued to do business until 1867, when he ceded the company to Duvinage and Harinkouck. As early as 1863, Ferdinand Duvinage (1823-1876) was a dealer of paintings and fans. In 1867, he teamed up with Alphonse Giroux for running the company installed Boulevard des Capucines. This partnership allowed him to label “Maison Giroux Paris” and then ” Ancienne Maison Giroux” on his works mounts. On 6 May 1874, Ferdinand Duvinage filed a first patent for “a kind of mosaic inlaying made of partitioned metal to be used on furniture and art objects.” This patent filed by Duvinage is really original. The process he invented is “the combined meeting of ivory as background, stained or exotic woods used for ornaments, and copper or other metal to partition ivory.” The ivory is intended to form the bottom and is hollowed to ” insert the wooden mosaic” and the son of copper. These, in most cases, represent the branches and stems of plants.

The first patent is complemented by two additions. Indeed, in February 1876, Duvinage imagined replacing ivory by imitating wood, such as boxwood. A few months later, in November 1876, he offered further to enrich the decoration of ivory partitioned furniture and objects by adding “applied metal or other material depicting birds, animals, shrubs, flowers, foliage, fruit, etc.., inlaid with pearls and precious stones.” This type of ornamentation was however little used by Duvinage, most of the time, his productions were confined to the technique described in the first patent. The Japanese style decors were always associated with nature, with birds and plants. In 1876, Rosalie Duvinage named “the Duvinage widow” took over the business after the death of her husband and took a patent in 1877 for a marquetry of Japanese inspiration, adding pearl decoration to the previous patent. We do not until now know any furniture, object or panel with pearl decoration. Signed works embellished with these designs were first exhibited to great acclaim at the 1878 Paris Universal Exhibition (D. Kisluk-Grosheid, ‘Maison Giroux and its ‘Oriental’ Marquetry Technique’, Furniture History: The Journal of The Furniture History Society, 1998, Vol. 34). Directed then by A. Philippe and E. Arnut from 1883 until 1884, the Giroux company closed definitively down in 1885.