A charming gilded bronze group representing two children with a basket of flowers at their feet and holding up a large vase ornamented with a lion skin, vine branches and grapes. Reposing on a moulded red griotte marble base. 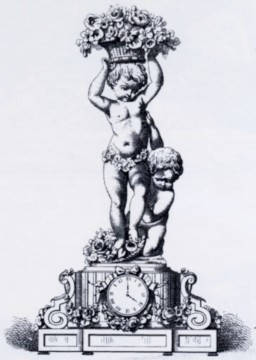 This children group, made by Cumberworth, cast in gilded bronze, was also mounted on a clock and presented in the 1860 sales catalog of Susse frères company.

Charles Cumberworth (1811-1852) was the son of an English officer and a French mother, he arrived in Paris at an early age. Student of the sculptor James Pradier (1790-1852), he joined the School of Fine Arts in 1829 and won Rome Grand Prize in 1842, but he was disqualified because of was not of French nationality. Cumberworth exhibited at Paris Salons from 1833 to 1848, mostly busts of women and children as well as allegorical statues of classical style.  He made the statues of Queen Marie-Amélie (1842) and the Duke of Montpensier (1847). As many artists, Charles Cumberworth signed a contract with the Susse brothers’ company, one of the greatest bronze editors-founders of the time, as early as 1837.

The Susse company, a worldwide renown foundry, began to cast pieces as soon as the first half of the 19th Century. Awarded medals several times at the famous Paris « Expositions des Produits de l’Industrie », Susse brothers, Victor (1806-1860) and Amédée (1808-1880), were known since 1841 as makers of « Art bronze pieces for clocks, candelabras, statuettes, etc. ». The most well-known French sculptors gave their sculpted models to Susse in order to cast them, such James Pradier (1790-1852) who signed in 1841 the oldest known publishing contract for bronzes between publisher and artist. After the death of the two brothers, Albert Susse took over the business from 1880 until 1922. He developed so far the company as to open a new luxurious shop in Paris, at n° 13 boulevard de la Madeleine.