Beautiful neo-Gothic style console table in mahogany and boxwood veneer. The veined marble top is underlined by a succession of broken molded arches evoking gothic architecture, and rests on six four-lobed columns in black stained wood with a quadrangular base, resting on an accolade-shaped base ending in eight flattened ball feet.

The Gothic style was brought back into fashion by the architect Jacques Hittorf (1792-1867) with the decorations made for the coronation of Charles X in 1824. It had a great success among the public with the success of literary works such as “Notre-Dame de Paris” by Victor Hugo in 1831 or the play by Alexandre Dumas, « La Tour de Nesle » in 1832. The furniture also followed the trend, as the neo-gothic salon of the princesse Marie d’Orléans in the Tuileries castle, or the neo-Gothic cabinet of the Count and Countess of Osmond in their Parisian hotel. 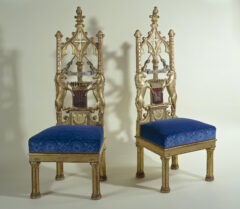