Beautiful Louis XVI style console with rounded sides in amaranth, amaranth and satinwood veneer framed with boxwood and ebony fillets and ornamentation in chiseled and mercury gilded bronze. It opens on the belt with a central drawer and two side drawers decorated with bronze friezes of scrolls and foliage. The bottom of the console is decorated with an elegant panel inlaid with sunflowers in a trellis. The tablet, surrounded by an openwork bronze gallery, and the top of the console are covered with a « vert de mer » marble, and the uprights, adorned with flowers in gilded bronze, rest on sheath feet ending in foliated hooves. 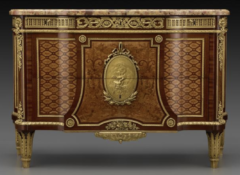 This console is inspired by Jean-Henri Riesener (1734-1806) models created during the 18th Century, and its decorative repertoire of marquetry and chiseled and gilded bronzes.

Born in 1812, Charles-Guillaume Winckelsen is one of the most talented cabinet-makers of the Second Empire period, taking inspiration from 18th Century furniture. He mainly used the Louis XVI style decorative motifs but without reverting to simple pastiche and creating then beautiful furniture. Winckelsen’s bronze casting was of the highest quality. He had his workshops in Paris at N°23 Val-Sainte-Catherine in 1854, moved in 1860 to N°21 rue Saint-Louis in the Marais, and in 1867 to N°49 rue de Turenne. His production varied from furniture to decorative works of art, specializing in particular in the Louis XVI style to a very high quality standard. As a very talented cabinet-maker he was often honored the commands from the aristocrats as well as the Paris wealthy high society, such as Lafitte, de Béhague, prince Radziwill. Following Winckelsen’s death in 1871, Henry Dasson (1825-1896) purchased on July 27 the workshop and stock from Winckelsen’s widow.

Born in Germany, Jean-Henri Riesener (1734-1806) came to Paris around 1755 to complete his training and entered the workshop of Jean-François Oeben, himself a German immigrant. On his death in 1763, he took over the management of the workshop and married his widow, sister of the cabinet-maker Roger Vandercruse. As long as Riesener did not have his own maîtrise, he used the stamp of J.-F. Oeben. Received maître in1768, he was appointed « ébéniste ordinaire du roi » in 1774 and, during the years 1769 to 1784, provided the Court and the royal family with sumptuous furniture in the neo-classical style. He is considered one of the best representatives of the Transition style and ended in 1769 the famous cylinder secretary of Louis XV, or “Bureau du Roi”, started by Oeben nine years earlier.