The bed exhibited at the Universal Exhibition, Paris, 1889

An exceptional Louis XVI style bedroom set in carved mahogany and veneered of sycamore with brass filets and gilt bronze ornaments. The set consists in a wardrobe opening with three mirror doors framed by carved columns and enriched with gilt bronze putti forming candelabra. The en-suite dressing table adorned with carved columns, as well, opens with four ranges of drawers with chiselled handles. The onyx top supports a large pediment with three mirrors enriched with columns, frieze, pillars and capitals, and flowers wreath. The carved bed, with its original three octagonal fabric panels, is accompanied by two side tables, one squared and the other oval, both with onyx top. Then, there are a table with two chairs. 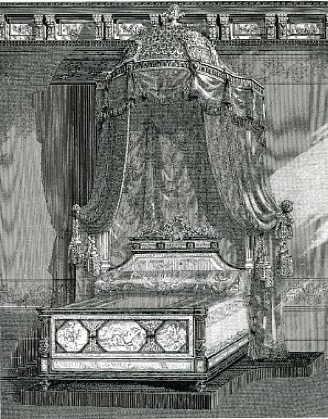 The bedroom set was certainly exhibited by Fourdinois at the Universal Exhibition in Paris, 1889.